Happy Wednesday peeps! Today Matt and Mike sit down and chat about the Amazon Prime Original sci-fi flick The Tomorrow War starring Chris Pratt and Yvonne Strahovski. Not time travel topics include The Thing, Blanton’s, and we need more Mags!

Wow, what a fun concept for a sci-fi film. Traveling back in time to draft your parents and grandparents to fight in a future war against aliens. This is what sci-fi is all about! The Tomorrow War is a fun action packed thriller you should take time out of your day to enjoy. Is this one going to win any awards or finally bring Matt to award 5 Reels, nope, but it is a heck of a fun time. The aliens are really well done and the action sequences are fast paced and intense. One of a handful of issues is that the film is very long. Sometimes it can really drag while other times the story feels rushed. Mike Talent thinks it would have been better as a mini series to really dive deep into the characters and world building. Both of your hosts agree The Tomorrow War is well worth a watch. Mike with the surprise almost perfect score awards the film 4.5 out of 5 Reels. Matt with a decent rating but not as favored gives it an average score with 3 out of 5 Reels.

Next week Mike and Matt switch streaming services to Netflix to check out the action pack assassin film Gunpowder Milkshake starring Karen Gillian and Lena Headey. Thank you for your continued support of our podcast and we will chat at you next week.

If you have a film you would like Matt and Mike to review, email us at nerds@reelfilmnerds.com

You can find us on all things social such as YouTube, Facebook, Instagram, and Twitter. Why not join our Facebook Fan Group so you can yell at Mike and Matt from the comfort of your keyboard while talking about films. Thank you for liking, subscribing, rating, reviewing, and telling your friends about our podcast. Stay home and stream as many movies as you can! 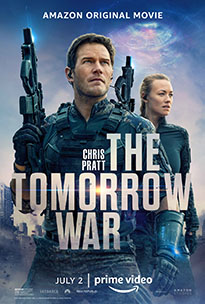 A family man is drafted to fight in a future war where the fate of humanity relies on his ability to confront the past.

Watch The Tomorrow War trailer below.